Is Uber legal in Costa Rica ?

Is UBER in Costa Rica Legal ?

It has been two years since UBER started operating in Costa Rica creating market disruption in the public transportation sector.   So, Is Uber in Costa Rica Legal ?

The main opposition to Uber in Costa Rica is the Union of Costa Rican Taxi Drivers (UTC) which has existed since the 1960’s and represents the red taxis that you often see circulating around Costa Rica.   The red taxis are subject to government regulation and permits under the supervision of the Public Transport Authority of Costa Rica (CTP).  In addition to the red taxi fleet an alternative transportation system developed parallel to the taxis known as “pirate taxis”  (taxis piratas).  They initially operated illegally outside of the confines of the law that regulates public transportation in Costa Rica.   In subsequent years this fleet began to organize and lobby the government to recognize their legal status to operate.

In 2014 the Ministry of Public Transportation approved new regulations to the public transport law that legitimized the “pirate taxis” under a new regime call SEETAXI (Servicio Especial Estable de Taxi).  This regulations was an attempt to stop the disputes that had taken place for years between the red taxi drivers and the “pirate taxis”.   Just as this dispute had begun to settle another major disruption enters the market, UBER.    Since Uber is a software platform that connects private parties it created a legal vaccum that the public transportation law of Costa Rica did not address.   As the drivers in Uber began to grow in Costa Rica so did the hostility of the regulated taxi services against Uber drivers. 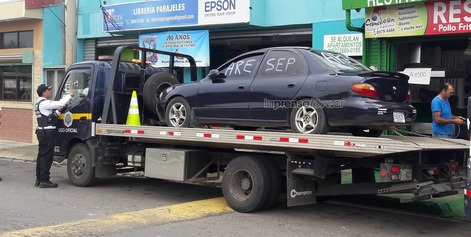 As a result of recent rulings by the Costa Rican Supreme Court that enforced the government regulation of the taxi services in Costa Rica the government of President Luis Guillermo Solis has officially announced by way of the Minister of Public Transportation that ” We shall formally declare the absolute illegality of any form of public transport that uses the Uber platform or any other.”  Based on this it is clear that the current government is taking the position that the use of Uber in Costa Rica is not legal.  Any Uber driver that is caught carrying a passenger is now subject to a fine of 160,000 Colones and the vehicle will be taken out of circulation. On the other hand Uber Costa Rica continues its position that the platform is legal and will continue to defend its drivers.

How to recover your property from a dissolved corporation

Legal Residents have an additional six months to...

How I Imported My Car to Costa Rica

How to Import a Car to Costa Rica

Driving in Costa Rica with a Foreign Drivers...

Protest over calculation of 2016 Marchamo

Buying a Car in Costa Rica