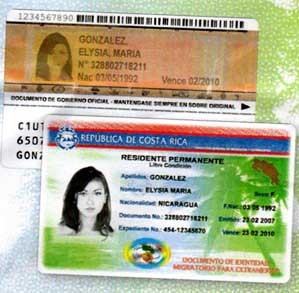 As such, those persons that have legally residency in Costa Rica  should already have a DIMEX card. Likewise, those foreigners that have renewed their residency status since 2008 should also have the DIMEX identification card.

What Does the DIMEX card have to do with Banking ?

As part of the Costa Rican Anti-Money Laundering policy a new regulation passed by the Executive Branch (Decreto Ejecutivo 36948-MP-SJ-JP-H-S) titled as General Regulations on Legislation against Narco-trafficking, Connected Activities, Money Laundering and Financing of Terrorism and Organized Crime

This Regulation provides that foreigners are required to have a DIMEX identification card which will be required as identification for banking purposes. The first portion of implementation of this regulation was the Central Bank of Costa Rica (BCCR) which issued their own regulations mandating that foreigners who did not have a DIMEX would not be allowed to process internal bank to bank transfers by way of the SINPE electronic transferring system.

If you are a resident in Costa Rica and have the older residency identification documents you will need to update it to the DIMEX format. To do so you can process it via Banco de Costa Rica by calling their toll free number which is 900-00-DIMEX (900-00-34639) and set up an appointment to get the new card

What If I don’t have Residency in Costa Rica

It is unclear. According to some sources the intent of this was to clear out of the system any old residency identification cards for legal residents which in turn makes it easier to prevent money laundering activities. On the other hand what about tourists that have bank accounts in Costa Rica. If you do not have residency in Costa Rica and have a bank account I suggest you contact your bank to determine how this regulation will impact the services that you are provided by your bank.

What is the Hoja De Filiación Form in...

Legal Residents have an additional six months to...

Do I Need a Visa to Enter Costa...

Travel to Costa Rica as a Tourist

How to Apply for Residency in Costa Rica...

How to authenticate Canadian documents for use in...

How to get an Apostille in the United...

Get your FBI criminal background search for residency...